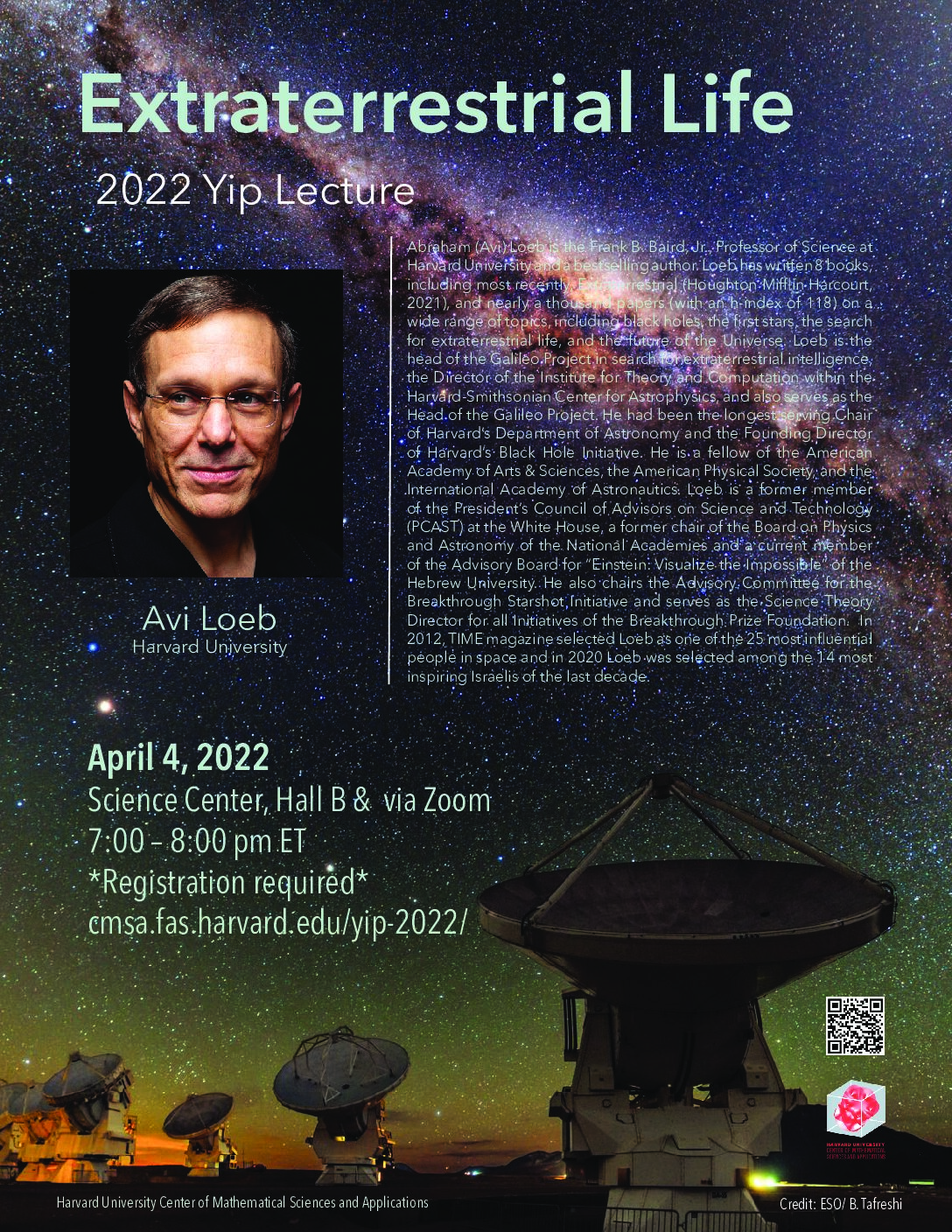 Are we alone? It would be arrogant to think that we are, given that a quarter of all stars host a habitable Earth-size planet. Upcoming searches will aim to detect markers of life in the atmospheres of planets outside the Solar System. We also have unprecedented technologies to detect signs of intelligent civilizations through industrial pollution of planetary atmospheres, space archaeology of debris from dead civilizations or artifacts such as photovoltaic cells that are used to re-distribute light and heat on the surface of a planet or giant megastructures. Our own civilization is starting to explore interstellar travel. Essential information may also arrive as a “message in a bottle”, implying that we should examine carefully any unusual object that arrives to our vicinity from outside the Solar System, such as `Oumuamua.

For more information, please visit the event webpage: https://cmsa.fas.harvard.edu/yip-2022/https://cmsa.fas.harvard.edu/yip-2022/
Registration is required
In-person option: Harvard Science Center:  Register Online for in-person
Online option: livestream via Zoom Webinar: Register Online for Zoom
Bio: Abraham (Avi) Loeb is the Frank B. Baird, Jr., Professor of Science at Harvard University and a bestselling author (in lists of the New York Times, Wall Street Journal, Publishers Weekly, Die Zeit, Der Spiegel, L’Express and more). He received a PhD in Physics from the Hebrew University of Jerusalem in Israel at age 24 (1980–1986), led the first international project supported by the Strategic Defense Initiative (1983–1988), and was subsequently a long-term member of the Institute for Advanced Study at Princeton (1988–1993). Loeb has written 8 books, including most recently, Extraterrestrial (Houghton Mifflin Harcourt, 2021), and nearly a thousand papers (with an h-index of 118) on a wide range of topics, including black holes, the first stars, the search for extraterrestrial life, and the future of the Universe. Loeb is the head of the Galileo Project in search for extraterrestrial intelligence, the Director of the Institute for Theory and Computation (2007–present) within the Harvard-Smithsonian Center for Astrophysics, and also serves as the Head of the Galileo Project (2021–present). He had been the longest serving Chair of Harvard’s Department of Astronomy (2011–2020) and the Founding Director of Harvard’s Black Hole Initiative (2016–2021). He is an elected fellow of the American Academy of Arts & Sciences, the American Physical Society, and the International Academy of Astronautics. Loeb is a former member of the President’s Council of Advisors on Science and Technology (PCAST) at the White House, a former chair of the Board on Physics and Astronomy of the National Academies (2018–2021) and a current member of the Advisory Board for “Einstein: Visualize the Impossible” of the Hebrew University. He also chairs the Advisory Committee for the Breakthrough Starshot Initiative (2016–present) and serves as the Science Theory Director for all Initiatives of the Breakthrough Prize Foundation. In 2012, TIME magazine selected Loeb as one of the 25 most influential people in space and in 2020 Loeb was selected among the 14 most inspiring Israelis of the last decade.

Click here for Loeb’s commentaries on innovation and diversity.

Refreshments will be served between 6:30–7:00 pm before the lecture.