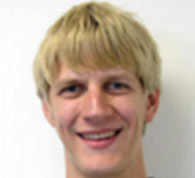 Alexander Smith, 2020 Ph.D. recipient, has been named a 2021 Clay Research Fellow. Clay Research Fellows are selected for their research achievements and their potential to become leaders in research mathematics. Dr. Smith was advised by Noam Elkies and Mark Kisin. He currently holds a National Science Foundation Postdoctoral Fellowship at MIT and will be based at Stanford University for a four year fellowship beginning July 2021.

“Alexander Smith has already solved major problems in number theory and forged a novel research programme that combines ideas from combinatorics and probability with sophisticated aspects of number theory. Conditional on the Birch and Swinnterton-Dyer conjecture, he has largely settled an influential conjecture of Goldfeld from 1979 describing how ranks should be distributed in quadratic twist families of elliptic curves. This significantly advances our understanding of the ancient problem of deciding which numbers are congruent in the sense of being the area of a right-angle triangle with rational side lengths. Smith has also determined the exact distribution of the Sylow 2-subgroups of the class groups of imaginary quadratic fields, thereby proving the Cohen-Lenstra-Gerth conjectures from the 1980s. In recognition of these achievements, he was awarded the inaugural David Goss Prize in Number Theory.”